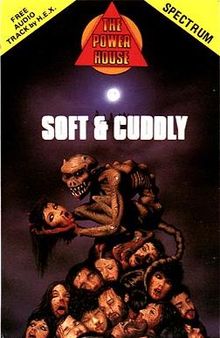 The 80s were the wild west of videogames, alright. Contrary to it's name Soft and Cuddly contains many things, arguably none of which are soft and cuddly.

I'm not actually 100% sure but I think this game is kind of infamous.

This misleadingly named ZX Spectrim game was deleloped by UK developer John George Jones, whom made the much more reasonably named Go To Hell two years prior. Jones is a very interesting person who has also appearantly lived 3 lives (of 12).

According to World of Spectrum the original price if this game was about £2. World of Spectrum also has a map of this insanity so you can see it for yourself (which I'm thankful for because it means I don't have to play it again to get screenshots 'cause I'm lazy lol) What's the yellow thing at the bottom? Hold your horses we'll get there in a moment.

I guess the genres of this game would be platformer and exploration. Your goal is to find the scattered 8 pieces of your mother, the android queen, to stitch her back together while gathering 8 keys to free out main character's father who's been locked in a freezer. Or so the instructions say.

Jones actually set the record straight. There actually are no keys. This plot makes my brain shut off. This game is the stamp of a very VERY interesting person. A person I don't know if I want to meet. (And if i said I didn't love it I'd be lying.)

Remember that yellow thing I mentioned? Complimentary eyebleach to who needs it.